The Hogfish (Lachnolaimus maximus) is one of the most sought-after species of reef fish for spearfishing across the globe. This species of fish are native to the Atlantic and Pacific Oceans, as well as the Caribbean and the Gulf Of Mexico. They are not only popular for their extremely abnormal appearance, but these fish are targeted for the delicious white meat that arguably makes them the best table-fare in the ocean.

Hogfish get their name from their abnormal appearance, which looks very similar to a hog (pig) and a fish. They are the only species of fish that look this way and are very easy to spot underwater.

How To Identify A Hogfish

Hogfish are one of the easiest species to identify, due to how unique their appearance is. This species of wrasse are flat and oval-shaped, with beady red eyes. The color of this species depends on whether they are male or female, and will differ throughout their lifespan.

With a hog-like pointed snout, these fish root around the seafloor searching for crustaceans and mollusks to feed on. All hogfish start out as females and then as they grow to be a certain size and age, some of them change into a male.

The females have more of a camouflaged pattern, with dark orange and brown coloring that blend into their surroundings very well. The males are a bright orange color with a very distinct red/maroon snout. You can often tell the difference between a male and female hogfish by the color of their snout. Female hogfish’s snout will blend into the color of their body, while male hogfish’s snout is an entirely different color than their body. 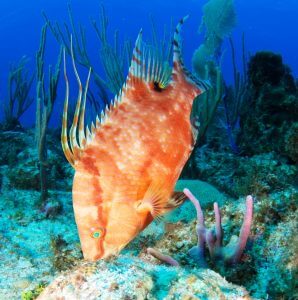 Where To Find Hogfish

Hogfish are reef fish, therefore you will often find them when spearfishing on reefs, ledges, and rock piles within 10-150 feet of water. These fish are only found at the bottom of the seafloor, you will not find them swimming in the middle of the water column like you would other species of fish. When spearfishing, make sure to cover the entire distance of the area that you’re diving, as these fish are not very afraid of divers and always seem to be feeding on the bottom in areas where there’s some good hard rocky bottom.

This species of fish live in packs of one dominant male and several females, so when you’ve found an area with one of them, there are most likely going to be more hogfish nearby.