The sport of spearfishing is unlike anything else, as you get to experience the underwater world and all different types of fish in their natural habitat. One thing you need to keep in mind is there are most likely going to be sharks in the area, and that you are entering their territory. This is not to frighten you off but to always make sure that you’re aware of your surroundings.

Sharks play a huge role in our oceans’ food chain and maintain a balance of all life underwater. Most shark attacks on humans have been caused by a misinterpretation, where the shark thinks that the person swimming is one of its normal prey. The other handful of shark attacks on humans have been due to the shark protecting its territory, as they are very territorial animals and don’t want anything to get in the way of one of their meals.

The question “do sharks attack divers” can be answered with both a yes and a no. Sharks do not single-handly target or go after divers. They only attack divers when they mistakenly identify the diver as prey, or if they’re protecting their home territory.

When diving and spearfishing, you need to understand there’s a high probability that sharks are in the area and they need to be treated with respect. In most cases, if you leave them alone, then they will also leave you alone. They are more curious about what you are and what you’re doing than anything else.

Is Spearfishing With Sharks Safe?

It is common for sharks to come check you out underwater because they aren’t used to seeing many animals or things of their size. If this happens to you when spearfishing, you want to try to not give off any signs of fear as they can sense that and it will make them more curious or even predatorial.

The beauty of spearfishing and having a speargun in-hand, that’s another 2-4 feet that you can use to keep that shark at a distance. There can be times when the shark is overly curious about who you are and what you’re doing, and you’ll need to give it a little jab or poke with the speargun to get it to back off.

You don’t want to actually shoot the shark with your speargun, all you need to do is give it a quick poke with the tip of your spear. This is usually enough for it to back off and realize that you don’t want them that close to you or checking you out in that manner anymore. 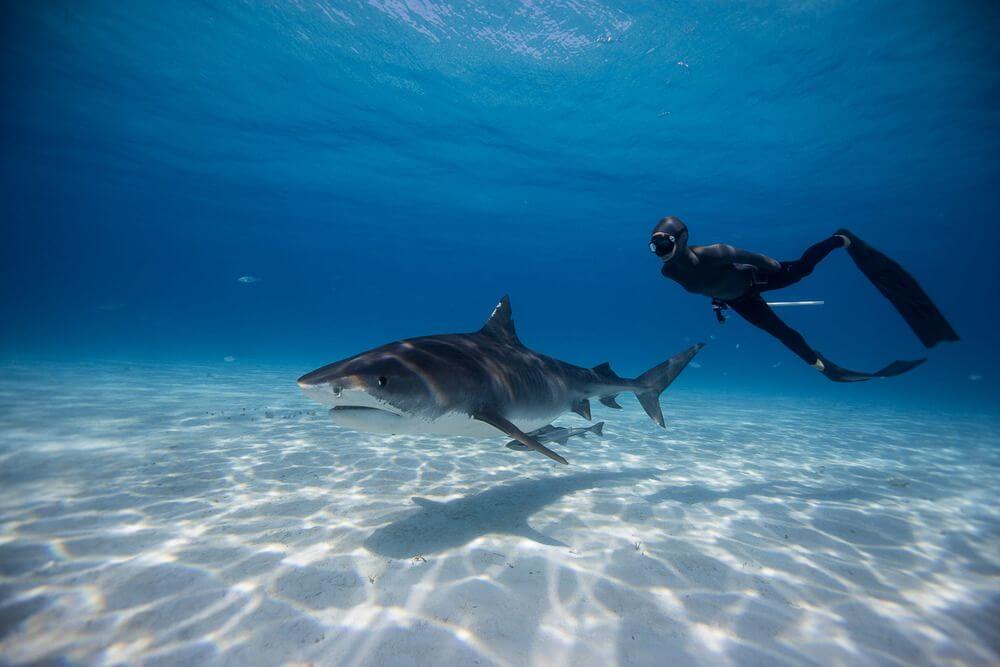 In most cases yes, sharks are friendly. They are often mistaken for killers that attack any human possible, due to movies and tv shows that have portrayed them this way. When in reality, sharks are friendly and are arguably one of the most beautiful and interesting species of fish. The way that sharks swim and patrol the ocean is unmatched and is something truly beautiful to witness underwater.

There are some factors that come into play when diving with sharks, such as the visibility underwater and the blood that they smell from you shooting fish when spearfishing. Obviously, it’s ideal to dive when the visibility is good because you can see fish and your surroundings much better. However, that is not always the case. Sometimes the wind, tides, and weather can make the visibility underwater so bad that you can hardly see your hand in front of your face. This is not an ideal time to dive and spearfish, as you’re not going to see or shoot any fish and you have no idea if there are sharks near you because you can’t see them.

When participating in the sport of spearfishing, you need to understand that there are most likely going to be sharks around. Having mutual respect for both the ocean and its inhabitants is essential for spearfishing safely and having a good experience. Following the tips provided in this article will help you have a fun and safe time when spearfishing with sharks.